He teaches in the area of Constitutional Law, Indigenous Law, and Environmental Law. His publications include, Recovering Canada; The Resurgence of Indigenous Law (Donald Smiley Award for the best book in Canadian Political Science, 2002). Canada’s Indigenous Constitution (Canadian Law and Society Best Book Award 2011), Drawing Out Law: A Spirit’s Guide, all from the University of Toronto Press. Professor Borrows is a recipient an Aboriginal Achievement Award in Law and Justice, a Fellow of the Trudeau Foundation, and a Fellow of the Academy of Arts, Humanities and Sciences of Canada (RSC), Canada’s highest academic honor, and a 2012 recipient of the Indigenous Peoples Counsel (I.P.C.) from the Indigenous Bar Association, for honor and integrity in service to Indigenous communities. John is Anishinabe/Ojibway and a member of the Chippewa of the Nawash First Nation in Ontario, Canada. 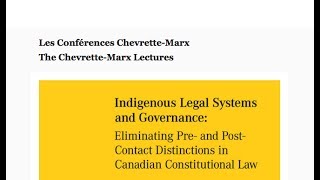 The Chevrette-Marx Lectures in Constitutional Law are held annually at the Université de Montréal Faculty of Law in honour of two of its most distinguished constitutional law professors. On September 21, 2016, Professor John Borrows, of the University of Victoria Faculty of Law, delivered the second Chevrette-Marx Lecture entitled: « Indigenous Law & Governance: Challenging Pre-Contact […]