Hoi Kong teaches and researches in the areas of Constitutional Law, Comparative Law, Administrative Law, and Municipal Law.
From 2002 to 2003, he was law clerk to Justices Marie Deschamps and Claire L’Heureux‐Dubé at the Supreme Court of Canada. From 2003 to 2006, he was an Associate‐in‐Law at Columbia University, and from 2006 to 2009, he was an Assistant Professor of Law, cross‐appointed with the School of Urban and Regional Planning, at Queen’s University.
He is a recipient of the Queen’s University Law Students Society Teaching Excellence Award (2008).
Hoi Kong joined the Faculty of Law of McGill University in August 2009 and he is a member of the Law Society of Upper Canada.
In May 2013, during Convocation ceremonies for the Faculty of Law of McGill University, Professor Kong was awarded the John Durnford Award for Teaching Excellence by the Law Student Association. 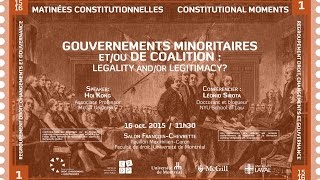