I am an Associate Professor of Political Science at McGill. I am also a faculty associate of the Universite de Montreal-McGill’s European Union Center of Excellence (EUCE) and the Institute for the Study of International Development (ISID).
My research examines the state of the rule of law in the post-Communist region. My book, entitled Politicized Justice in Emerging Democracies: A Study of the Courts in Russia and Ukraine (Cambridge University Press, 2012) focuses on problems with judicial independence in new electoral regimes and argues that intense political competition makes politicians more rather than less willing to interfere in court decision-making.
I have two current projects. The first examines the role of the judiciaries of the post-Communist EU members in tackling political corruption. The second focuses on post-Maidan judicial reform in Ukraine.
At McGill, I teach courses on democratization, European courts, and the rule of law. You can find some of my syllabi here.
I received a BA in Government and Spanish Literature from Dartmouth College and an MA and PhD in political science from Harvard University. 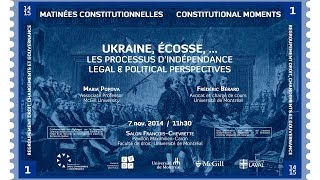