She was member of the Advisory Panel of Experts on Freedom of Religion and Belief, ODIHR-OSCE (2005-2012). Currently she is the Spanish representative member of the Legal Working Group (LWG) of the European Group of National Human Rights Institutions (Council of Europe). Her research expertise comprises International Religious Freedom, Comparative Law, Equality, Religious Minorities, National Minorities, Xenophobia, Multiculturalism and Immigration. 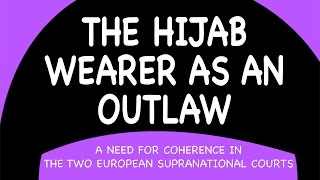 The Hijab Wearer as an Outlaw: a need for coherence in the two European Supranational Courts

Muslim women who wear a headscarf have gradually become outlaws in Europe to the extent that the headscarf itself has been “de-normalized” and automatically problematized in different societal contexts. Claims of discrimination on the basis of wearing religious garments have been only partially successful in courts. As result, politicians and government actors aligned with judicial […]