Professor Varuhas’s research and teaching interests cross the public law-private law divide; his specialisms lie in administrative law, the law of torts, the law of remedies, and the intersection of public and private law. He has published on topics in private and public law in leading international journals including the Cambridge Law Journal, Law Quarterly Review, Oxford Journal of Legal Studies and Modern Law Review, and in edited collections, has presented at international conferences across the common law world, authored policy reports, and has several books in press. Professor Varuhas’s most recent books include Damages and Human Rights (Oxford, Hart Publishing, 2016), a major work on damages for breaches of basic rights, which stems from his doctoral thesis for which he won the Yorke Prize at the University of Cambridge, and Public Law Adjudication in Common Law Systems (Oxford, Hart Publishing, 2016), a volume of essays co-edited with colleagues at the University of Cambridge. Professor Varuhas is a founder and co-convenor of the Public Law Conferences, a biennial series of major international conferences on public law. He has been consulted by government, think-tanks and the media, as well as on litigation. 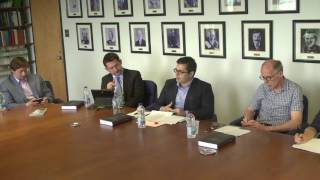